Polypharmacy is the concurrent use of multiple medications by a patient. It is not a condition, it is simply a statement of fact. While the number of medications qualified as polypharmacy is not clearly defined, technically it is > 1, it is generally agreed that polypharmacy is most common in the elderly, apparent in about 40% of older adults living in their own homes. Chronic disease patients and those suffering intellectual disabilities commonly exhibit polypharmacy.

With a younger demographic, polypharmacy is not usually a problem as many people take only a few, easily managed medications. However, polypharmacy is an area of concern for seniors and the frail elderly because of several reasons. Elderly people are at a greater risk for adverse drug reactions (ADRs) because of the metabolic changes and reduced drug clearance associated with ageing; this risk is furthermore exacerbated by increasing the number of drugs used[1]. This is further complicated for patients that are just released from hospital. Despite receiving written and verbal information, 27% of older people discharged from hospital after heart failure were classed as non-adherent within 30 days. 10% did not remember receiving any information, the majority remembered receiving oral information, but less than one in four recalled any written information.

What happens when recently released patients are provided with new prescriptions or instructions to stop their old prescriptions? Do they tell their pharmacist, or do they assume the pharmacist already knows? Do pharmacists receive updated health and prescription data directly from the hospital or physician? Do pharmacists know if they are the sole source for all medications for a patient?

It is widely published that up to 30% of hospital re-admissions are due to Adverse Drug Events (ADEs) of which polypharmacy contributes towards medication non-adherence and medication errors. Much of this is preventable. With older populations and increasing with our aging society, it is common for patients to forget to take their medications, creatively alter their medications, engage in unendorsed polypharmacy, mix their medications, and take medications in combinations that may have dire “cocktail” effects, ranging from dizziness and confusion to hallucinations, bradycardia, apnea and even death.

Furthermore, medication reconciliation, the process of comparing a patient’s medication orders, prescriptions and OTC, to all of the medications that the patient has been taking also highlights a major and contributing factor to ADE. Polypharmacy makes medication reconciliation more difficult. It is common for prescriptions to not be filled, prescriptions filled at several pharmacies and prescriptions issued by several doctors. Following hospitalization, it is common for medications and dosages to be altered. A problem is revealed when new regimens and stoppages of existing medications are dictated by the physician, but not always communicated to the pharmacist. The lack of an integrated platform or communications solution means that polypharmacy is a risk factor in the well-being of the patient and a cost driver for our health care system. 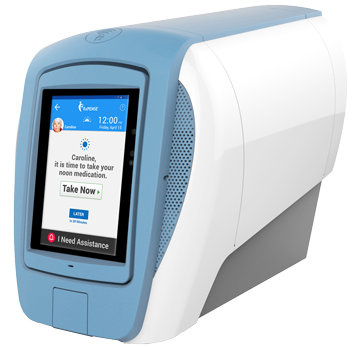 The RxPense® offers a solution in securing known medications into the device. Seniors are notified when it is time to take their dose, authenticated and validated with biometric and video evidence. When they do not take their medications, caregivers and health care providers are notified. While this ensures only 1 pharmacist is the medication gatekeeper for the patient, it also allows other healthcare providers to monitor consumption and adherence. Vitals and other health data points are collected at each dispensing. All data is securely uploaded o the cloud. The importance of including the pharmacist, and only one pharmacist per patient, in all communications and medication preparations means that medication reconciliation becomes quick and successful.

To alleviate a common breakdown in communication between the patient and the pharmacist, the physician can ePrescribe directly to the pharmacy and subsequently monitor and confirm the dispensing. The RxPense® can issue notifications of loading and unloading of medications directly to the pharmacist and physician. In addition to ePrescribing, the pharmacy could have access to medication reconciliation (MEDREC) software to ensure a complete, current, accurate picture of the patient under review.

While ePrescribing and MEDREC are not universally available at this time, there is a significant effort in Canada and the USA to eliminate the antiquated paper-based prescribing and the fax machine. In many jurisdictions, ePrescribing is mandatory.

In conclusion, the RxPense® enables better communications between patient, caregiver, physician and pharmacy. ePrescribing ensures better communication between physician and pharmacist. Medication reconciliation ensure everyone has an accurate picture of the patient. Together, the RxPense®, combined with ePrescribing and medication reconciliation can have a significant effect on reducing the adverse effects of polypharmacy on our aging population.

← Will Canada Be Able to Care for Its Aging Population? Part 2. Caregivers Need Care Too →